Reports are out claiming that Julian Draxler is a step closer to leaving Schalke. 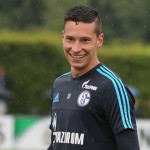 The German international has rejected a contract extension at Schalke.

The Daily Express says the Germany winger is coveted by Arsenal, Manchester United and Serie A side Juventus.

United were linked with a late move for Draxler after missing out on Pedro, who joined Chelsea.

But Juventus are thought to be in negotiations with the German side and are the front-runners for his signature.

Arsene Wenger has monitored his progress for the last two summers and was linked with a move again this morning.