It has been reported that Marco Reus has announced he’s penned a new deal with Borussia Dortmund. 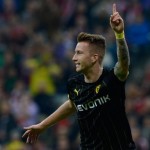 The German international confirmed that he has signed a new contract with relegation-threatened Borussia Dortmund until 2019.

“I am happy to have extended the contract,” Reus said in a club video interview. “When I came here (in 2012) I said I wanted to do things. I have the feeling that it’s not over even in this situation.<>
“We fall together and we win together, it is a decision for life. I did not think about it that long for no reason.”