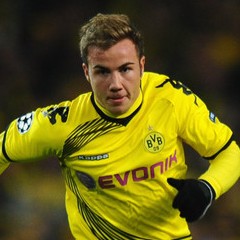 Borussia Dortmund star Mario Gotze may have missed out on a January move to England.

The Sun revealed that the Germany international is out until next month with a thigh injury — putting a Premier League move in jeopardy.

Manchester United, Chelsea, Arsenal and Liverpool have all been linked with a January swoop for the Borussia Dortmund playmaker, 19.

However the talented youngster tore a muscle in Sunday’s 1-1 Bundesliga draw with Kaiserslautern.