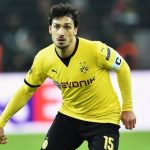 Reports are out claiming that Mats Hummels says he’s set himself a date to make a decision over whether he will leave Borussia Dortmund.

The Daily Star says reports in Germany suggest Arsenal and Manchester United are both keen on landing the Borussia Dortmund defender, who is about to enter the final 12 months of his contract.

Following last night’s 3-0 German Cup win over Hertha Berlin, the 27-year-old said: “I’ve set a date [for my decision], but I’m keeping it to myself.

“It’s costing me half an hour before bed every night.”

Barcelona are also interested and Hummels previously hinted at a departure from Dortmund.

“I want to play a certain kind of football but I also want to win titles.

“The better the team, the greater the stimulus, to be part of it.”