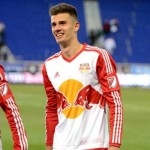 Reports have emerged claiming that Chelsea are on the verge of completing the signing of New York Red Bulls defender Matt Miazga.

The Daily Express is reporting the 20-year-old passed a medical with the Blues on Thursday and is set to sign a four-year deal at Stamford Bridge within the next 24 hours.

It is understood Chelsea will pay the Major League Soccer outfit £3.5million for the highly touted American international.

Miazga enjoyed a breakout year in the MLS and is rated as one of the top defensive prospects in the competition.

Arsenal and Manchester United are also said to be keen on the talented youngster. Arsenal In Talks With Borussia Dortmund For Sven Bender