It has been reported that Matthias Ginter has declared he wants to leave SC Freiburg this summer. 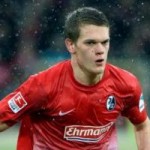 The German international defender has been scouted extensively by Manchester United and Arsenal over the past season.

He told Kicker: “I’ve had plenty of time to think and my decision stands.

“I don’t want to put anyone under pressure, but I hope that I don’t have to worry about it at the tournament.”

Aaron Ramsey : Arsenal Will Still Be A Force!