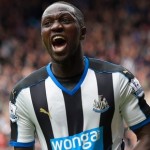 Reports are out claiming that Newcastle United midfielder Moussa Sissoko has made a bold claim by stating that Chelsea manager Jose Mourinho is courting his services.

In an underperforming Magpies side, Sissoko has arguably been one of the better performers and many believe that it is just a matter of time before the French international moves on.

The likes of Manchester United and Arsenal are said to have been monitoring Sissoko and now the midfielder himself has gone on to claim that Premier League champions Chelsea are also interested in his services, with Mourinho allegedly following his progress.

Speaking to the Chronicle, Sissoko said: “Is he (Mourinho) following my progress? According to what I am hearing, yes. He is one of the best managers in the world. He has won so many titles. Any player would love to be coached by this man.

“For the moment, I am coached by other people (John Carver). If one day I have the chance to work under his guidance, I would be very happy.”