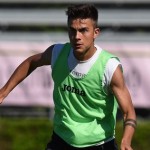 Reports have emerged claiming that Paulo Dybala is set to have a medical with Juventus ahead of his expected summer move to the Italian champions.

The Palermo striker, who has been heavily linked with Premier League clubs recently, is set to join the Bianconeri on a £28million once he completes his medical on Thursday.

Despite being a target for the likes of Chelsea, Arsenal and Manchester United, 21-year old Argentine Dybala said he had chosen Juventus because the Turin club really wanted him.

Dybala told Sky Sport Italia : “Juventus are the side who wanted me the most,”.

“They made a real effort to sign me and this is why I made my decision. I can certainly win the Scudetto there as they are a winning team. I always play to win and can find success with them.

“It will be impossible for me to forget everything I’ve experienced in three years at Palermo. I was happy from the very first day. I know that to play for Juve, I have to do much more and I’m sure I can improve a great deal.” Mesut Ozil Confident Of Qualification For Arsenal In The Champions League