Reports are out claiming that Pedro has cast doubt on his future at Barcelona. 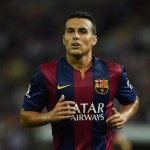 The Spanish international attacker was asked about his limited role this season.

“Every year it’s complicated to play here because I’m competing against the best players on the planet. It’s difficult to be 100-percent happy, but I feel comfortable here.

“Those of us who have fewer minutes want to play. I don’t know if they’ll ask me to leave. I’m happy here and I want to continue but I don’t know what might happen tomorrow. We’ll talk at the end of the season.”

The 27 year old is wanted by Premier League giants Arsenal and Manchester United.