It has been reported that Aston Villa defender Ron Vlaar hints he could be on the move. 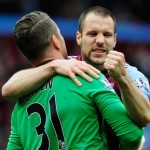 The Dutch international’s current deal expires at the end of this month.

Vlaar has been linked with Manchester United and Arsenal.

“I’ll think about it,” said Vlaar.

“I want to maximize my career and think I can go a step higher. I will look at things calmly before making a final decision.”