Reports are out claiming that Everton boss Roberto Martinez has warned Premiership rivals that Seamus Coleman is not for sale. 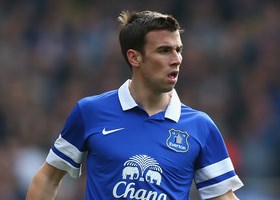 The 25 year old has reportedly attracted interest from the likes of Manchester United, Arsenal and Manchester City.

The Spaniard said: “We won’t offer encouragement to any club over Seamus. He is on a long-term contract and we want to ensure we grow together and we need players like Seamus.

“Yes, it is the intention to offer him a new contract. We are already thinking about Seamus, Ross (Barkley) and John Stones. We want to reward them, even James McCarthy.

“We hope they will feel excited about developing with the football club and I think with the young players we have got in the club – Seamus, Ross, James McCarthy – they are footballers I believe to be of the highest, highest level.”

“That is something we will look at this summer. They are players with long-term contracts. It is not a decision just to keep them at the club; it just highlights the next step of their development and rewards them for their performances.

“Seamus has got a long-term contract. James and Ross are the same. But we want to reward them.”