Reports are out claiming that Stephan El Shaarawy could still be set for a summer departure from AC Milan. 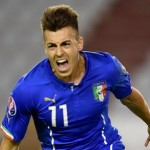 The agent of the 22-year old Italian international forward has opened the door to a possible San Siro exit for his client who has previously been linked with the likes of Arsenal, Manchester United and Liverpool.

“He’s happy at Milan,” said his brother and agent Manuel.

“Let’s see what happens with the team this summer, the transfer campaign seems a bit different from recent years.

“A move for El Shaarway? There have been several teams interested, Stephan is a player who lots of teams like.