Reports are out claiming that Manchester United have joined the interest for Barcelona midfielder Sergi Samper. 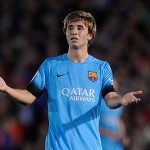 The Daily Star says United have joined Arsenal in the hunt for Samper.

The 20-year-old is rated as one of the best prospects to come through the La Masia academy in recent years but he has struggled to nail down a spot in Luis Enrique’s starting XI.

Samper has an £8.5m release clause in his Barca contract and has emerged on Louis van Gaal’s radar.

A United scout was present at last night’s goalless draw against third-tier Villanovense in the Copa del Rey with the deep-lying midfielder said to be the focus of attention.