Reports are out claiming that Manchester United and Arsenal are interested in Bayer Leverkusen winger Karim Bellarabi. 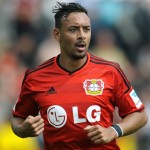 BILD claims that United have joined Arsenal’s long-term interest in the Germany international.

United boss Louis van Gaal has spoken of the need to add pace to the team’s flanks in January and Bellarabi fits the bill.

The midfielder is tied to Bayer until 2020, but there are rumours of the deal carrying a buyout clause – which sports director Rudi Voller has denied.

United could have the edge on Arsenal in a two-way battle after selling striker Javier Hernandez to Bayer last summer.