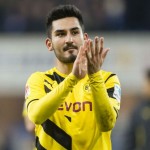 Reports are out claiming that Manchester United are believed to be showing significant interest in Ilkay Gundogan.

The Sun reports that United are set to do battle with Arsenal for the Borussia Dortmund midfielder who is being linked with a summer move.

Jurgen Klopp’s decision to leave Dortmund at the end of the season has prompted plenty of speculation regarding his players with many of them now the subject of interest from clubs all over Europe.

It is believed that 24-year old German international Gundogan, who has been a target for the Gunners recently, would cost any interested club around £20million.