Reports have emerged claiming that Olympiakos defender Konstantinos Manolas is linked with a move to the England Premier League. 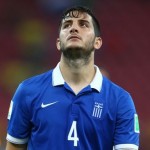 The Greece international centre back is said to be weighing up his options after impressing in European competition over the past two seasons.

Athens media sources claims that the 23 year old is under consideration at Manchester United and Arsenal.

For his part, the former AEK Athens star has not ruled out staying in Athens for the new season. David Moyes Admits Man Utd Could Have Won Against Arsenal

Wenger to sell Szczesny and Vermaelen this summer