It has been reported that Manchester United are the latest club to be linked with Paris Saint-Germain midfielder Adrien Rabiot. 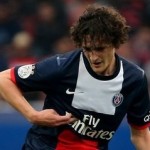 Tuttosport reports that the Red Devils are showing significance in the 19-year old Frenchman who is looking to leave Parc des Princes in the winter.

Rabiot, who recently turned down a new offer from PSG, was a target for Premier League pair Arsenal and Chelsea as well as Italian side AS Roma but now Louis van Gaal’s United have joined the race.

The France U21 international, formerly of Manchester City’s youth academy, has been with PSG since 2010 and has made 43 senior appearances since making his debut in 2012.