Reports are out claiming that the son of Nottingham Forest legend Des Walker is attracting Premier League interest. 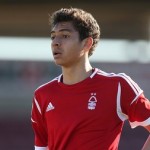 Tyler Walker, a striker at Forest, has Tottenham, Arsenal, Liverpool and Manchester United all tracking his progress, says the People.

Walker enhanced his reputation by firing a hat-trick during an FA Youth Cup tie at West Brom last month.

The 18 year-old striker is expected to make his Forest debut before the end of the season.

Tyler shares his Dad’s turn of pace – but is a very different player, as Des only scored once in his whole career.