Reports have emerged claiming that Arsenal, Manchester United and Liverpool’s pursuit of Jorginho could come down to Napoli’s transfer plans this winter. 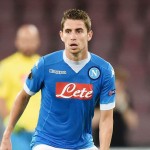 According to reports, the 23-year-old Brazilian-born Italian midfielder is wanted by all three Premier League clubs but the Gunners, Red Devils and Reds may be indirectly foiled by an Italian club.

Mirko Valdifiori, who joined Napoli from Empoli in the summer, has been pushed aside by Jorginho in Maurizio Sarri’s midfield which could influence the Naples club into selling the 29-year-old to a Serie A rival.

Valdifiori’s agent Mario Guffredi has revealed that there is plenty of interest in his client from Palermo as well as a handful more Italian clubs which could see Napoli keep hold of Jorginho if the once-capped Italy international happens to leave Stadio San Paolo in January.

“I must say that it’s not just them who have contacted me, but at least three or four Italian teams.

“We’re not used to doing things by halves, so our idea is to stay at Napoli, because Mirko wants to gain a starting spot.

“At the moment Valdifiori is the alternative to Jorginho, but he doesn’t feel that way. We’ve chosen Napoli, and we intend to pursue it.

“January is a time of reflection for everyone – for us, for Napoli – but in our heads we’re not thinking about leaving or questioning the choices we made this summer.

“I’ll have to do some talking in private, but we won’t take Valdifiori away from Napoli.”