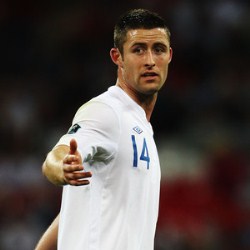 Sensational news are out and it has been revealed that Arsenal and Manchester City are ready to do battle for Bolton Wanderers defender Gary Cahill.

The London Evening Standard has reported that Arsenal are set for a £17million battle with Manchester City for the England international centre back after losing out to Manchester United in the race to sign Phil Jones from Blackburn.

It is believed that the 25 year old is still top of Wenger’s wish-list and a club source claimed today that his valuation is “not impossible”.

Wenger is searching for a commanding centre-back and believes Cahill fits the bill perfectly but he was reluctant to agree to Bolton’s valuation in January and considered a deal for Blackburn’s Christopher Samba instead.

Arsenal face competition for Cahill’s signature from City, who can offer a superior wage packet, while a move to Eastlands would enable Cahill to remain at home in the north-west.