Reports are out claiming that Fulham remain at risk of losing Patrick Roberts. 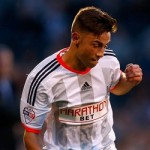 The Mirror claims that Manchester City, Manchester United and Arsenal are keeping tabs on the England prospect.

The talented 17 year old attacker has signed a professional contract until 2016 but clubs are circling with a view to snatching him in January.

It is another major headache for crisis-club Fulham who are bottom of the Championship.