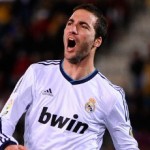 Arsenal now appears likely to miss out on their two top transfer targets this summer despite having a £70 million budget to spend and a willingness to spend it.

Last week Arsenal chief executive Ivan Gazidis promised that the club would spend heavily this summer, having arrived at a place where they can dip into their own self-produced funds.

And at the very top of Wenger’s transfer shortlist are forwards Higuain and Jovetic, from Real Madrid and Fiorentina respectively.

However, while the Gunners may potentially have the resources to sign the players, they look set to miss out on the pair with Juventus in pole position for both.

The Serie A club held talks with Real Madrid at the weekend over a move for Higuain, who is valued at around £21m by the Spanish club.

Juventus remain the frontrunners to secure Higuain despite director general Beppe Marotta saying: “Real Madrid have told us that Higuain is not for sale and that no decision will be taken before the new coach arrives.”

Real are likely to allow Higuain to leave this summer and may be playing hardball in the hope to drive up the Argentine striker’s price, or invite further interest from Arsenal.

But the 25-year-old made it clear he felt his future lies away from the Bernabeu at the end of the season, when he was quoted as saying: “I am leaving Real,” said Higuain. “I have been here for seven years and I have taken my time to make this decision – it isn’t a heat of the moment thing.”

Meanwhile, Jovetic also appears close to joining Juventus after he admitted he wants to leave Fiorentina to play for their Turin-based rivals.If he does make the move make sure you keep a track of all of the latest european football scores

“I have been at Fiorentina since 2008 for five very intense seasons,” Jovetic told Italian sports paper Gazetta dello Sport. “I really feel like I’ve given everything.

“I’m young and ambitious and it is normal to feel the need to test myself elsewhere. I do not think there’s anything wrong with desire.”

“I’ve played in Europe with Fiorentina, now I want to win in Europe.”

“For a year they (Juventus) have said they want me. I come before (Zlatan) Ibrahimovic, (Carlos) Tevez and (Gonzalo) Higuain in their list. Who would not be flattered?”

Chelsea to swap Torres for Cavani