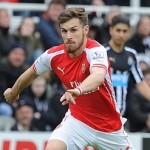 Reports are out claiming that Manchester United legend Paul Scholes is impressed by the current form of Arsenal midfielder Aaron Ramsey.

Scholes wrote in the London Evening Standard: “I watched Ramsey against West Ham and I thought that in both games he looked sharp.

“He scored against West Ham and then against Monaco when he came on and, at the moment, he carries that threat that he will either create a goal or get one himself.”