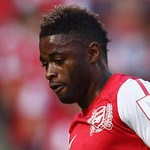 Arsenal midfielder Alex Song has been charged by the Football Association for his stamp on Newcastle United’s Joey Barton on Saturday.

The FA today released a statement about the fiery match, confirming they had charged both Arsenal and Newcastle, as well as Song.

“Newcastle United and Arsenal have been charged by The FA with failing to control their players following Saturday’s (13 August) fixture at St James’ Park,” read the statement.

“Both clubs have been charged following a mass confrontation of players following an incident in which Arsenal’s Gervinho was also shown a red card in the 75th minute.

“Following Gervinho’s dismissal Arsenal have today lodged a claim that the standard punishment of a three-match suspension is clearly excessive. A Regulatory Commission will hear the claim on 16 August.

“Meanwhile Arsenal’s Alex Song has been charged separately by The FA with violent conduct following an incident earlier in the same fixture.

“Both clubs have until 4pm on 18 August to respond to the charge, whilst Song must reply by 6pm on 16 August.”