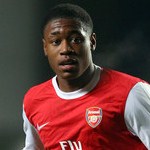 Reports have emerged that Stevenage have snapped up Arsenal midfielder Chuks Aneke.

Aneke has joined League One side Stevenage FC on loan until January 22, 2012.

The 18-year-old England youth international will team up with fellow young Gunner Luke Freeman, who joined the ‘Boro last week and made his debut for the side on Saturday, playing 85 minutes of their 0-0 draw at Leyton Orient.