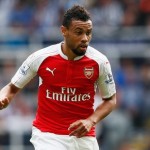 The 24-year-old defensive midfielder won the Uefa European Under-19 Championship in 2010 but has not represented his country since making his final under-21 appearance in 2012.

“Every player wants to represent their country and the Euros in France is something massive for any French player to be a part of,” the midfielder told Arsenal Player.

“To be part of the squad would be amazing but there are loads of things to do first and the most important thing is Arsenal.

“If I play well here maybe I will get a chance for France, but the most important thing is Arsenal. As any French player would, though, you want to play for France and hopefully it can happen one day.”

Arsenal Not Interested In Selling Joel Campbell To Olympiacos