It has been reported that Arsenal midfielder Jack Wilshere has been charged with misconduct by the FA and now risks a possible ban from the top-of-the-table Premier League showdown against Chelsea. 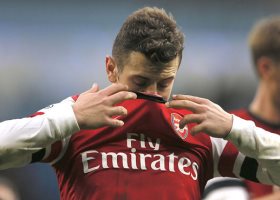 Television cameras picked up the England international raising his middle finger in the direction of home supporters during the second half of the Gunners’ 6-3 defeat.

Wilshere has until 6pm on Wednesday to respond to the charge.

Press Association Sport understands the FA took its time to gather evidence to understand the context of the situation having received the observations of referee Martin Atkinson and his officials on Monday, and have now decided there is a case to answer.

A statement from the FA read: “Arsenal midfield player Jack Wilshere has been charged by the FA with making an offensive and/or insulting and/or abusive gesture.

“The charge follows an alleged gesture made during the fixture between Manchester City and Arsenal at the Etihad Stadium on Saturday 14 December. The incident was not seen by match officials, but was caught on video.

“Wilshere has been charged retrospectively by the FA under a new pilot project for potential ‘not seen’ incidents in Premier League matches.

“Under the new process, if an incident has not been seen by the match officials, a three-man panel will be asked by the FA to review it and advise what, if any action, they believe the match referee should have taken had it been witnessed at the time.

“For an FA charge to follow, all three panel members must agree it is a sending-off offence. In this instance, the panel were unanimous.

“Wilshere has until 6pm on 18 December to respond to the charge.”

Such sanctions have been implemented in the past as was the case with Liverpool striker Luis Suarez, who was suspended for one match, fined £20,000 and warned as to his future conduct after he made a gesture to home fans as he walked off the pitch following a 1-0 defeat at Fulham in December 2011.

Gunners boss Arsene Wenger admitted in his post-match press conference that the club would accept any ban handed out “if he did it”.

If that is the case, then Wilshere is likely to miss the visit of Chelsea to the Emirates Stadium next Monday.