It has been reported that Arsenal midfielder Jack Wilshere is delighted to have won a first FA Cup. 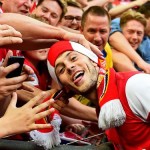 The England international midfielder returned to the Arsenal side towards the end of the season, coming off the bench to play a part in their remarkable comeback in the FA Cup final against Hull City.

“It’s nice to get the first one (medal),” he admitted.

As a kid growing up in Stevenage he visualised another trophy, one with even more significance than the FA Cup.

“When I was a youngster…you want to be part of that, you can only imagine what it would mean to the fans back home if we won the World Cup. That’s what we will try to do. Hopefully we can create something special. I have thought about it, especially after winning the FA Cup, you saw what that meant to the Arsenal fans.”