Arsenal midfielder Jack Wilshere has revealed that he regrets being snapped smoking. 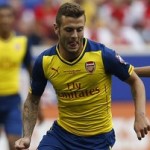 The talented central midfielder has moved quickly to assure fans fretting over his form and fitness ahead of the new season that his mind is firmly on the ball.

“People make mistakes. I’m young I’ll learn from it. I realise the consequences it has and the effect on kids growing up.

“I have kids myself and I don’t want them growing up to think their dad smokes and it is okay for a footballer to smoke, because it’s not.

“It does motivate me to try harder in training and not just in training.

“I don’t like to talk about to it too much but this is a big season for me.

“I came back early to pre-season to show people my commitment. I am fully committed to the club and to my job and I want to show everyone that.”