It has been reported that Arsenal midfielder Jack Wilshere says he tries to ignore the criticism that comes his way. 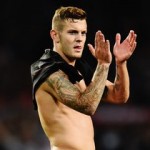 However, the England international admits he was took some comments from Robbie Savage on the chin.

“It doesn’t hurt me as much,” Wilshere said.

“It probably disappoints me a little bit more.

“I heard what Robbie Savage said and that was, if you like, the first ex-player to give me constructive criticism. I respected that. I’ll take criticism.

“I know that’s part and parcel of football, but when it’s just reckless and aggressive, I don’t listen.”