It has been reported that Arsenal midfielder Mesut Ozil has found himself in the middle of a German scandal. 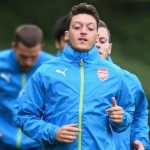 The Daily Mail revealed that Ozil has been dragged into a public row with a fellow German footballer and accused of cheating on his pop star girlfriend Mandy Capristo.

“Mesut exploited his fame, and muscled in on our relationship,” said Lell in BILD.

Ozil himself has refused to comment on the situation.

“We are not commenting on this. We will keep an eye on the situation, and take legal action if necessary,” said his agent Roland Eitel.

AS Roma To Rival Arsenal For Clint Dempsey