It has been reported that Arsenal midfielder Mesut Ozil was always confident of rediscovering his best form. 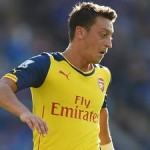 The German international was named in the Premierleague.com’s 2013/14 team of the year after a users’ poll attracted more than 12,000 votes and the German used the results to point out how quickly opinions are moulded and remoulded.

He added: “[Just] 10 weeks ago I was elected to the team of the season in England.

“I was world champion then. It was the summer break and after a few games everything is called into question again. This is strange, but I know what I can offer.”