Arsenal midfielder Mesut Ozil has declared himself among the best players in the world. 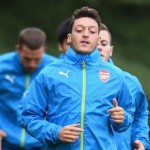 The German international says he needs to be played in his natural position for him to be at his best.

“I’m one of the best players in the world in that No 10 position,’’ Özil told the Telegraph.

“Fans, coaches, players and everyone knows that my best position is playmaker.

“It’s different playing on the left. When I was in Madrid, I often played on the right. I enjoyed that because I’m left-footed and I was able to cut inside to give assists and get shots on target. On the left, it’s more difficult. If I do get past someone I’m still away from the danger zone, still on the flank, and it’s harder for me to find the final ball with my right foot than with my left.”