It has been revealed that Mikel Arteta insists he feels in good shape after completing the season with Arsenal. 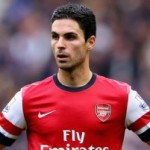 The former Everton midfielder is now 32.

But he told arsenal.com: “I’ve felt really good throughout the season, but obviously I don’t want to go through games like the Chelsea and Liverpool ones again.

“That was tough to come to terms with – I’m a very competitive person and when I lose like that my head just blows away. But physically I’ve been fine, I’ve played in the holding role quite a bit and slightly differently when I’ve played along Mathieu. Things have felt okay.”