It has been reported that Athletic Bilbao are chasing Arsenal midfielder Mikel Arteta. 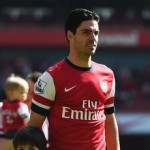 It is said that Bilbao see Arteta as a replacement for Ander Herrera, who moved to Manchester United this week.

Marca says Basque Country-born Arteta fits the bill for Bilbao, as the club have a policy of only signing players born in the region.

He joined Arsenal in a £10m deal in August 2011, after a six-year spell with Everton.

He won his first trophy with the club in May after Arsenal beat Hull in the FA Cup final.