Reports are out claiming that former Arsenal striker Charlie Nicholas says it’s time for their big-name players to deliver in Europe. 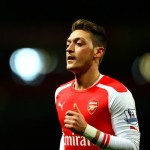 “I’m fed up saying this about Arsenal players on big European nights, but it’s time to start delivering on the biggest stage,” Nicholas told Sky Sports.

“Ozil is a player who has had plenty of big nights in his career with Real Madrid and, of course, he’s a World Cup winner.

“But, so far, the only player who has come up trumps in the big games this season has been Santi Cazorla. As good as he has been, Sanchez has been pretty quiet in all the big games.

“And so has Ozil. He doesn’t touch the ball as often as I’d like, but he’s undoubtedly a class act. He’s got good vision, a great touch and surprisingly good pace.

“You expect him to turn up on the big occasions and do the business for you. So for me, it’s time for Ozil and Sanchez to perform in the Champions League.”