It has been reported that Arsenal midfielder Santi Cazorla expects a wide field to compete for this season’s Premier League title. 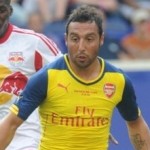 The Spanish international believes next season’s Premier League is too close to call with all their title rivals strengthening as well this summer.

“Manchester City are the current champions and will always be the ones to watch out for,” he said.

“Manchester United are coming off the back of a bad season – but they will come back stronger this season. Having no European competition this season will focus their attention on the league.

“Then there’s Chelsea, who have made great signings: Diego Costa, Cesc Fabregas, Courtois, who has returned… But it’s difficult to choose one, the problem is that there are many.

“I do not want to forget other teams like Liverpool, who went so close to the title last year, or Tottenham. I’m sure it will be very open and just hope that Arsenal are in the top group.”