It has been reported that Arsenal midfielder Santi Cazorla is aware of Atletico Madrid’s interest, but will only discuss Gunners future once the World Cup is over. 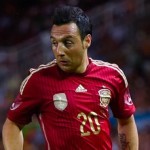 However, the 29-year-old Spanish midfielder has revealed that he has discussed life at La Liga champions Atletico with Diego Godin and Juanfran.

Cazorla told AS on the transfer talk: “When the World Cup is over, I’ll start thinking about my situation.

“I don’t want to be thinking about it right now and I’ve told my agents not to tell me anything if an offer comes in.

“But I know a few of the Atletico players – Godin, Juanfran – and I know the side well from when I was playing the Spanish league.

“But until the tournament is over, I won’t know if the rumours are true or not.”