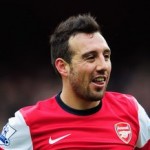 Santi Cazorla has dismissed speculation that he is heading for the exit door at the Emirates stadium.

The 28 year old Spanish international has been linked with Atletico Madrid who are said to be preparing a bid for the former Malaga man.

Atletico coach Diego Simeone has expressed his interest in Cazorla commenting last week that “anything is possible” when asked about the midfielder.

However, Cazorla, who is set to join up the Gunners for pre-season training, has reaffirmed his commitment to Arsene Wenger’s side.

He told reporters: “There has been a lot of speculation about a move to Atletico Madrid but I’m very happy at Arsenal, I have a contract there and I start training on Monday.

“Perhaps I will return to Spain one day, but right now it’s very unlikely,” he added.