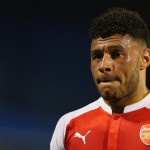 Reports are out claiming that Arsenal midfielder Alex Oxlade-Chamberlain has suffered a minor setback in his recovery from a hamstring injury.

The England international was unavailable for Arsenal’s visit to West Bromwich Albion.

However, he now could be back for the clash against Norwich next weekend.

“He had a slight little setback on Monday but we checked it by scan and there is nothing wrong but he is still a fraction short,” confirmed Wenger. Bacary Sagna On Evra : I Will Never Criticize Another Team!