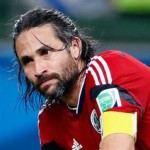 It has been reported that Arsenal have missed out on veteran Colombian defender Mario Yepes.

It’s been reported Arsenal were in talks with the former Atalanta and AC Milan stopper, who was a free agent over the summer. Disappointed Bendtner Ready To Fight For His Place At Arsenal