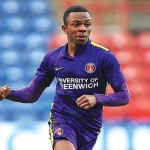 Reports are out claiming that Charlton Athletic prospect Regan Charles-Cook is being watched by Arsenal.

The South London Press claims that the Gunners are looking at Charles-Cook – three years after releasing him!

The Gunners let Charles-Cook go in 2013 but have had scouts watching him in recent Under-21 games.

Liverpool are also interested after sending their own spies to check on the 19-year-old. Arsenal Boss Arsene Wenger Has No Complaints With Hull Draw