Reports are out claiming that Arsenal are monitoring Isco’s situation at Real Madrid. 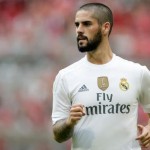 The Daily Express revealed that Isco has reportedly told Real president Florentino Perez that he wanted to leave the Bernabeu and search for new opportunities and Arsenal are interested.

They could face competition from Chelsea for his signature, should be become available in January.

It has been reported that Arsene Wenger has already told his board to make a bid for Isco, as they look to bolster their Premier League title challenge. Higuain : I Will Be Back Before The Season Ends!