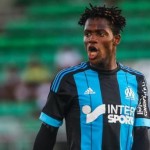 Reports are out claiming that Arsenal are keeping tabs on Marseille striker Michy Batshuayi, with a view to signing the 22-year-old during the January transfer window.

French website Mercato365 claims that Gunners boss Arsene Wenger has identified Batshuayi as one of his primary targets once the winter window opens.

The Belgian international has scored six goals in just nine Ligue 1 appearances for Marseille this season and is seen as the perfect talent to push Olivier Giroud and Theo Walcott at the Emirates Stadium.