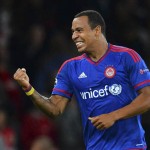 According to Fichajes.com, after their defeat in the Champions League, Gunners boss Arsene Wenger was so impressed with the winger – who scored once and assisted another goal – that he is now prepared to make a shock move for him.