Reports are out claiming that Palmeiras forward Gabriel Jesus is being watched by Arsenal. 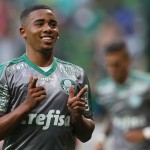 The Sun says Arsenal are keeping tabs on Jesus, who is considered one of the country’s brightest talents.

The Palmeiras forward has already attracted interest from a wealth of European clubs, with Juventus, Roma and Benfica all showing interest.

Jesus, 18, has made quite an impression having won the league’s ‘Best Newcomer’ award and tipped for stardom by legendary Brazilian striker Ronaldo.

He said: “I’m betting on two talents, they’re still developing but have a lot of quality.

“Gabriel Barbosa of Santos and Gabriel Jesus of Palmeiras are very young talents and haven’t even turned 20.” Arsene Wenger Happy With The Form Of Theo Walcott