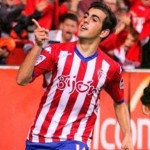 Reports are out claiming that Arsenal are tracking Sporting Gijon striker Carlos Castro.

O Jogo reported that Arsenal and Benfica are following the Segunda Division star leading up to the summer market.

The 19 year-old Spain U21 international has scored seven goals in 19 games this season.

Castro has spent his entire professional career with Gijon and is tied to the outfit until 2018.