It has been reported that West Ham United are moving to open new contract talks with Winston Reid. 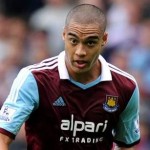 The Telegraph claims that the New Zealand international is among the options being looked at by Arsenal to replace Thomas Vermaelen.

The 26 year old only has a year remaining on his West Ham contract, but the Upton Park club have offered him a new deal thought to be worth around £55,000-a-week.

It remains to be seen whether that is enough for Reid to commit his future to West Ham or wait to see whether Arsenal make a move for him.