Reports have emerged claiming that Real Madrid striker Karim Benzema is being linked with a mega bucks move to Arsenal. 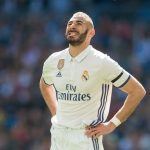 Benzema is apparently growing frustrated with the criticism he receives at the Bernabeu for his style of play and perceived attitude.

Don Balon claims that Arsenal are proposing to double his current reported wages of £150,000 a week.

That would make him the highest-paid player at the Emirates, and the French international striker is sensationally thinking of accepting.

The Gunners could be without Champions League football next term, but the club are looking to spend. Liverpool’s Raheem Sterling Hoping To Be Fit For Arsenal Clash