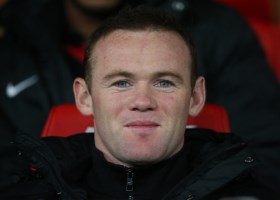 It has been revealed that Manchester United striker Wayne Rooney is looking forward to this Sunday’s Premier League showdown against Arsenal.

Rooney announced himself on the Premier League stage against them with his wonder strike for Everton in 2002 and two years later, following his £27million move to United, he won the penalty for Ruud van Nistelrooy opener, then scored the second as the Arsenal ‘Invincibles’ saw their 49-match unbeaten record come to a shuddering halt.

Overall the England international has scored ten goals against the Gunners.

“It is a bit weird. I am sure they must be sick of the sight of me at times.

“That first goal for Everton does seem like a long time ago.

“It was obviously a special goal for me, plus they were 32 games unbeaten. And I will always remember the 2004 game.

“There had been a lot of hype around it because of what happened the year before with Ruud van Nistelrooy.

“That was as tense as I ever remember it before a game.

“Arsenal were a fantastic team and it was a great feeling to beat them 2-0 and end that record.” REVEALED : Sevilla Refused To Do Business With Arsenal Over Carlos Bacca